At the season’s beginnings, we had mated pair Ira and Ghost. Ira was our resident mother last year. Low activity with Ira led to questioning her health though she looked healthy. After being chased by mate Ghost at the end of April, sightings of Ira ceased. Before and after her disappearance, Ghost worked diligently gathering material for the barn burrow. He made alterations to the barn den, changing the entrance hole and dug another exit hole leading outside.

Before Ira’s disappearance, a second male was seen and then another male! We now had three males, Ghost, Guard, and Patches. Each was observed on the barn trail camera photos. There were some spats and chases between Ghost and Guard, some initiated by Guard and some by Ghost. The males were seen in the yard simultaneously but with some distance between them.

ARRIVAL OF GRETA AND SOLE

At May’s end, we were surprised to see one baby in our barn and subsequently identified the little one’s mother. There were no other babies. We named the mother Greta and her only baby, Sole. Where they came from is unknown. Patches and Guard continued to be seen while sightings of Ghost eventually ceased. Possible mates of Greta are thought to be Patches and/or Guard[1]. We also began having periodic visits by an unknown yearling. Although there were no siblings for Sole to play with, we observed the adults and the yearling covering that area of activity with Sole.

We had wondered how Greta would begin breaking the ties with Sole. Later in June, she was absent for a couple days though we continued to observe males Patches and Guard. Trail camera images showed Sole playing with an adult thought to be Guard. We believe that males assist in helping the juveniles to become independent. Without siblings to explore with, Sole was somewhat slow to wander too far, but by late June, Sole had finally traveled back to Burrow #5. By July, it appeared that the chucks were no longer living in the barn. They did continue to make visits to the barn, deck and shed dens.

Since there was minimal chuck presence, we began to close up problem holes. One burrow had been dug close to our basement foundation, under our deck. Deck planks were removed, the den was filled in, and a barrier was installed to prevent the chucks from digging so close to our house. During the process, Sole would visit and check out our progress. Because the chucks use the area below the deck, we left a portion of that space for them. The last chuck seen in 2018 was Sole in early October. We questioned whether chucks were hibernating in the barn over winter.

Over winter, trail cameras photos showed 4 skunks in the barn using the chuck’s burrow. We kept watch in February and March for groundhogs to emerge from the barn, but none were observed. There were no photos on the trail camera in the barn showing chuck activity. For the first time since 2003, there were no groundhog residents at Woodchuck Wonderland! There were 3 groundhog sightings in March. They were likely all males, probably looking for mates. The burrows in our area of observation remained unoccupied. Then in review of trail camera photos, we saw a chuck both inside and outside the barn on March 26th and March 28th! Eureka. Unfortunately, though we had several visiting groundhogs throughout the season, none remained to take up residence. We now await the 2020 season to see what may develop. 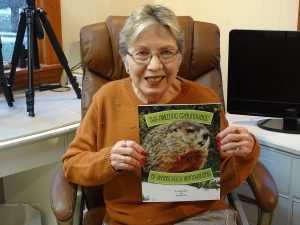 I’ve written a book, co-authored by my husband, about the groundhogs we observe on our property. The title is “The Amazing Groundhogs of Woodchuck Wonderland”. Our target group is juvenile, older kids, but I think adults will also find it interesting and informative.